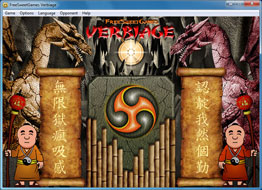 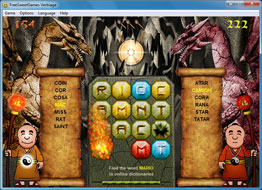 Many centuries ago, the founders of the Shou and the Lyao monasteries was created the Monument of the ancient fragments of the meteorite. On its surface were placed runes containing letters. This was the key to prosperity in monasteries for centuries.

Each new year chosen monk goes to the Monument. He must replenish chi energy to continue the tradition of blessed monastery life.

One by one the monks make up the words of the runes of the Monument. Runes can be moved by sliding to an adjacent empty seat. Adjacent letters must be on adjacent horizontal or vertical runes in any direction. Each word of the made by the monk brings the chi energy.

Dragons guarding the Monument may impose spells on the runes. The Golden-domed has always supported the monasteries. Because of his spells, not even the most smart monks collected a huge amount of chi and return the lucky winners.

It is believed that the first monks did not use the amulets - a powerful concentration of the mind helps to solve any problem. But the new generation has taken care of this special equipment. Strength of the amulet can throw the chosen rune on an empty place.