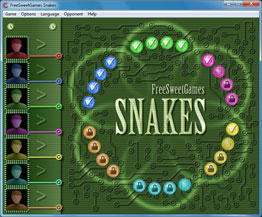 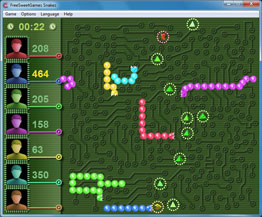 Overtake opponents and get the object the first by directing the snake.

Snake enters to the territory of the zone from the position on the perimeter. New snake consists of three segments, this is its minimal size.

The snake is in constant motion, and its movement is subject to certain rules. Upon reaching the border snake creeps out on the opposite side.

If the head of the snake crosses the opponent, the snake is destroyed. After some time, the new snake can be entered to the zone. If a snake crosses own tail, it kills only bitten off part.

Growth charges appear regularly in the zone. Touching it increases the size of the snake, and also adds to the total stock of the collected energy. Recoverable amount of the charge at a time depends on the length of the snake.

In addition to growth there are bonuses in the zone. Bonuses occur spontaneously and can temporarily change the characteristics of snake.

The winner is the one who will bring the greatest amount of energy to the end of the allotted time.