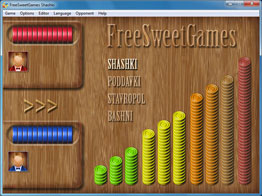 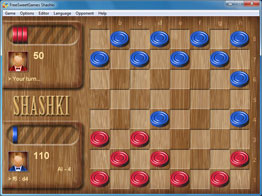 The game with various play styles of each opponent.

Ten levels of difficulty allow you to pick the opponent AI matches your abilities. Opponent thinking time is directly proportional to the chosen level of AI and capacity of your computer.

Reward Points distinguish the best among the winners. Every successful action (movement of pieces, transformation into a queen, capture opponent pieces) brings the points that reflect your masterful victory.

Shashki is played by two people, on opposite sides of a playing board, alternating moves. One player has blue pieces, and the other has red pieces. Pieces move diagonally and pieces of the opponent are captured by jumping over them. The playable surface consists only of the dark squares. A piece may only move into an unoccupied square. Capturing is mandatory. A piece that is captured is removed from the board. In all variants, the player who has no pieces left or cannot move anymore has lost the game.

Uncrowned pieces move one step diagonally forwards and capture other pieces by making two steps in the same direction, jumping over the opponent's piece on the intermediate square.