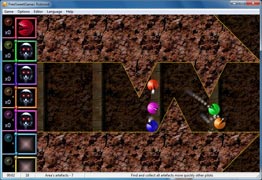 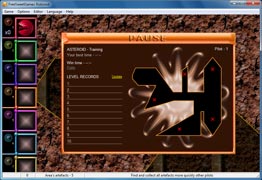 Rotoroid's driving - popular entertainment of natives of one of the remote systems. This unusual means movement is concluded in the strong case and supplied by the tiny jet engine. The main feature of the rotoroid consists that it does not have internally steering. The pilot operates «one button» – engages or switches off the engine. The flight direction is regulated by interaction of the rotoroid with surrounding objects.

Rotoroid's competitions are spent on asteroids. In thickness of an asteroid cut out labyrinths in which establish illumination, gauges and cameras, place artefacts. Spectators observe of races on telecommunications. Sometimes in depths of asteroids there are strong electro-magnetic anomalies which influence movement of rotoroids. It is defined by electric sparks and influence on rotoroid movement.

Driving the rotoroid, move on a labyrinth and grasp the found artefacts. The one who the first will grasp all artefacts at level, becomes the winner. The major principle of rotoroid's driving is rotation. If the rotaroid does not rotate it is uncontrollable. Flight on a spiral or an arch will lead to the purpose more quickly, than prompting on a straight line. Watch actions of opponents.