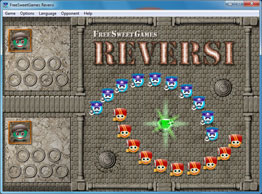 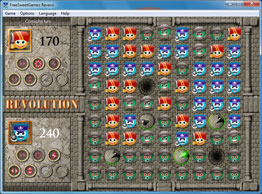 It is time to create a revolution!

Smaragdine artifact that was brought to the planet from outer space, has become the basis of total dictatorship. Damaging radiation of the crystal suppresses the will of the people and turn into willing slaves.

«Golden Million» of dictatorial suite is bathed in luxury and pleasure, and at this time plodders spend their days in underground factories. Occasionally getting out to the surface, workers fall into the heady stench of smoking potion and the radiation of towers, destroy any free thought.

However, the underground Comiche Party and the Ungers Party have learned to hide from the brainwashing. With their help, many zealous henchmen of the dictatorship lost their lives. Now, party members are recruiting new followers to start a revolution...

To recruit candidate you need to turn in your party at least one member of another. Recruited candidate becomes the center of the line that extends horizontally, vertically and diagonally to the other party members. All members of the rival party, crossing the lines, go to your side.

Beware of towers mounted on squares to suppress dissent. Smaragdine beam, regularly spouting from the top, drew all the people that fall in his way, into obedient zombies. Tower radiation changes direction after each shot.