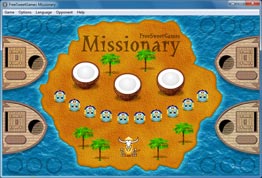 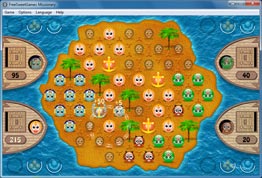 Save the heathen souls from hell fire.

Missionaries of various religions flocked to the newly discovered archipelago in the hope of a bountiful harvest of new followers. Simple-minded pagan belief of savages could not compete with the sophisticated theologians, so the power struggle was between the followers of new cults.

Choosing your missionary, you can turn to the faith of any near-savage. All of his neighbors who had already been converted to other faiths, do not succumb to the temptation and become your followers, too.

The missionary can jump over one location, but in this case, a savage from the source location once again falls into paganism.

In addition to the savages on the island are the totems of shamans. Shaman can not pay preaching, as other savages - he's too sly and cunning. However, the shaman is totally dependent on its surrounding neighbors, who give him a carefree life. If most of neighbors will turn into another cult, the shaman immediately creates a new totem.

The game ends when all the savages converted or opponents are not able to make a move. The winner is the cult has received the most points.