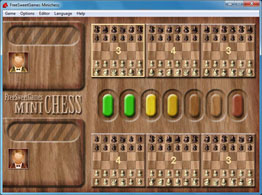 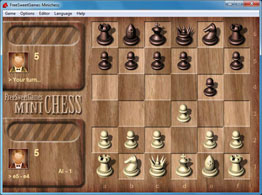 A wise strategy and fast tactics of the tiny chessboard.

Minichess has simplified the chess rules. At the start of the game some pieces are set down in the horizontal row of squares, nearest each player. The pieces are divided into two matching sets, by convention called white and black. The players alternate moving one piece of their own at a time.

Each piece moves according to specific rules and is removed from the board when an opposing piece moves into its square, thus displacing it. A pawn cannot move backward. If a pawn advances all the way to its last rank, it is then converted to a queen of the same color.

The object of the game is to checkmate the opponent's king by placing it under an inescapable threat of capture. Also the player loses if no valid moves. However, the winner does not receive points for the remaining pieces.

In addition to checkmate, the game can be won by the voluntary resignation of one's opponent, which may occur when too much material is lost, or if checkmate appears unavoidable. Also the player can offer complete game in a draw.

You can create a starting position of pieces by using the editor. All changes are saved when you exit the game. Additionally, you can save the created position in the file.