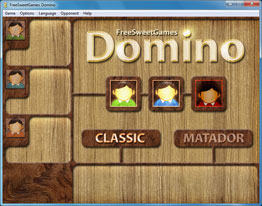 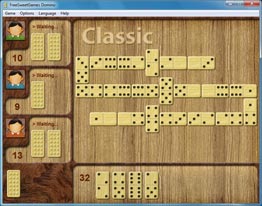 Dominoe clogging by the classical and matador rules.

The first bone starts the chain of play, a series of bone in which adjacent domino halves touch with matching. The players alternately extend the chain with one bone at one of its two ends. If a player cannot play, he must draw from stock untill he draws a bone which he can play.

The game ends when one player wins by playing their last bone. The game can be blocked because neither player can play. In this case, the next player takes a stock and the player with the least number of pips wins.

The Matador start deal, the first move and the end of the game are the same as the classical rules.

Adjacent sides should not bear the same number, but total 7 pips instead. Blanks are closed to play of any bones other than a matador. There are four matadors - 1-6, 2-5, 3-4 (containing a total of seven pips) and 0-0. A matador may always be played, it match every value. The domino after a matador can use any of matador side to get the total 7 pips.