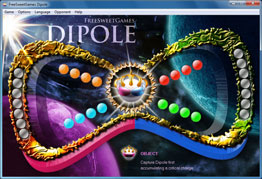 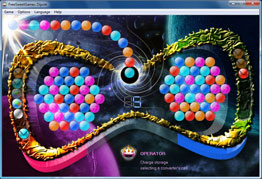 Uncompromising struggle for control over the star artifacts.

3510 AD. In the vicinity of the galactic core faced the interests of humans and aliens, when one of the star clusters were discovered grand artifacts of long-vanished civilization.

Artifact was named Dipole. Located next to the star, the Dipole captures its radiation. Then it accumulates through the symmetric converters in two types of energy. Humans use only one type, and aliens, respectively, only different.

It was soon discovered that occupy the empty space of the Dipole operators can manually save the critical charge of the same type, then the Dipole passes to the accumulation of just this energy.

Operators manage their converters one by one. During the turn operator may charge the storage, selecting a group of cells of one color. More cells in the group provide higher charge. As the charge storage is made available special modifiers. Using them, the operator can targeted change the state of the cells.

The winner is whoever gets the critical charge of the first.