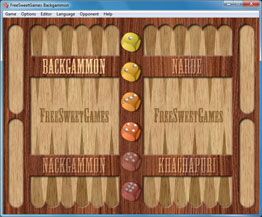 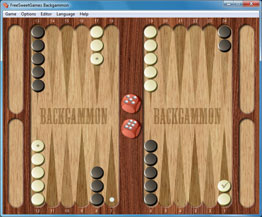 One of the oldest classes of board games for two players.

BACKGAMMON. This is a game for two players in which checkers are moved after each roll of the dice. A player wins by removing all of his checkers from the playboard before one's opponent can do the same. Although luck plays an important role, there is a large scope for strategy. With each roll of the dice, players must select from many options for moving their checkers and anticipate possible counter-moves by the opponent.

NACKGAMMON. This backgammon variation was invented by Nack Ballard. It is the same as the regular game, except that each player starts with two additional back checkers.

NARDE. This is a popular Russian game. A major difference between Narde and Backgammon is that there is no hitting in this game. A checker may be moved only to an open point, one that is not occupied by any opposing checkers. A player can move only one checker off of the starting point. Also building the sequence of checkers the player has no right to create an impassable barrier for the checkers of the opponent if there is no at least one checker of the opponent ahead of this barrier.

KHACHAPURI. This Narde variation is from the Caucause region and very popular in Georgia, Armenia, Azerbaijan and other places. The rules is the same as the regular game, except start position and move any number of pieces off your head each turn.